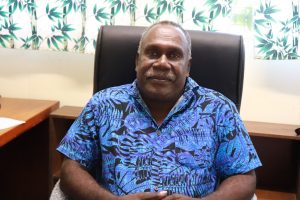 Lokay is an accountant and auditor by profession and he brings to SINU over 20 years of professional experience and a wealth of financial knowledge in areas such as internal audits, budgetary control, capacity development, revenue collection, procurement and financial reporting, to name a few.

Originally from the Choiseul Province, Lokay was educated at the Papua New Guinea University of Technology (Unitech) where he obtained a Bachelor of Commerce in Accountancy and holds a Master of Social Science in Accounting and Development Finance from the University of Birmingham in England.

He succeeded in his profession as a civil servant, obtaining several leadership roles within the public service starting at the provincial government level working his way up to the executive level. During his career, he also participated in workshop training relevant to the field of accounting, finance and auditing for further knowledge development.

Peter Lokay recently served as the Auditor General in the Solomon Islands Office of Auditor General for the past five (5) years, from 2016 until March 2021. During his tenure as Auditor General, he worked mainly with the Solomon Islands Government Ministries, Financial Institutions, Provincial governments, State-owned Enterprises and major aid donors. Additionally, he was involved as a public financial management consultant for SIG and Major aid donors namely, the Ministry of Foreign Affairs and External Trade (MFAET) and the Department of Foreign Affairs and Trade (DFAT).

Before this, he was the former Financial Advisor to RAMSI in the year 2003 until 2012 where he significantly contributed his expertise in financial management for the Ministry of Finance and Treasury (MOFT) and other line ministries such as the Ministry of Legal Affairs and the Ministry of Police and National Security. He was also a management accountant before acquiring his position as financial controller before taking up the position as General Manager for the Commodities Export Marketing Authority in 2001-2003. In year 1997-2000, Mr. Lokay was the Accountant General in the Solomon Islands Ministry of Finance and Treasury.

Given his previous experience upholding such high calibre positions, Mr Lokay is also the Vice President of the Institute of Solomon Islands Accountants (ISIA). As he takes on his new role as Finance Director, he will oversee the financial operation of the University and with such valuable experience, it will contribute to the future of SINU’s financial success. “Now is our time to work for the future generations; joining SINU is a humble honour,” Mr Lokay said.