The Maritime Academy prepares men and women for successful careers in passenger transportation, merchant and cargo transportation, international trade, safety and rescue and other maritime sub-sectors.

Programs offered by the Maritime Academy are as follows: 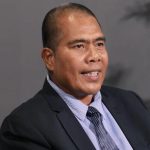 Dr Teorae who hails from the Republic of Kiribati is better known as the first I-Kiribati and Tab-South Shipmaster to hold a Doctorate with over 30 years of experience in the maritime and shipping industry.

Before his appointment at SINU, Dr Kabure spent more than 8 years teaching at a Maritime College in Madang, Papua New Guinea. He is well-versed in the maritime industry and brings with him a wealth of expertise from working on board ships as well as a shore-based career that included Maritime Training and Education. He will be assisting the Maritime Academy at SINU in reaching new heights with his excellent level of experience as a seafarer in international waters.

Career highlights include his sea time between 1993-1999, he attained his goals of being a seafarer, obtained a position as a junior officer before he got promoted and did his sea time on board foreign-going cargo ships in Germany. In 1999, he achieved his Class 1 Master in Certificate of Competency maritime studies at the New Zealand Maritime Academy in Auckland.

In 2006 Dr Kabure worked as a senior Maritime Lecturer at a Maritime College in PNG. After 8 years of service, he became Head of the Nautical Department at the PNG Maritime College. Kabure did not stop learning during that time, he reached the highest technical level of maritime and he decided to do the 1st part of his Post Graduate studies in 2008. He progressed on to obtain his MBA from the Australia Maritime College (University of Tasmania) majoring in Maritime Logistics. He was then awarded his Doctorate from the Atlantic International University in Honolulu Hawaii.